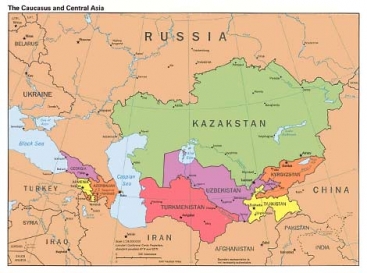 In addition to national-level activities, the project supports strong regional cooperation, including development of framework laws on protected areas and an interstate agreement for a West Tien Shan transboundary conservation area. The three countries are collaborating in joint planning efforts to designate wildlife corridors and appropriate land uses to maintain the reserves as a linked protected area network, as well as joint training, joint research and monitoring of key wildlife species, especially those predators and ungulates known to require large home ranges in these mountain habitats. The project is promoting regional cooperation in the management of the West Tien Shan to strengthen protected area and corridor management, natural resources management, and incentives to local communities. Good progress has been made through collaborative approaches to adopting new technical and social standards for protected areas management, improvements to biodiversity laws and regulations, establishment of a transborder protected area network, and organization of ecotourism in the West Tien Shan. A bioregional plan for conservation in the greater West Tien Shan ecosystem will integrate activities within the protected areas, their buffer zones, and corridors that connect them. The plan is being developed using an integrated GIS platform for the three countries.

Importance to biodiversity:
Situated at a biological crossroads, the West Tien Shan in Central Asia, the westernmost range of the great Himalaya chain, is species rich with, some 3,000 recorded species of flora and fauna. The region covers a range of climatic conditions from sub-tropical to tundra and glaciers, from semi-arid steppe to snow covered peaks. The mountains harbor unique stands of walnut (Juglans regia) forest, wild ancestors of cultivated fruit-bearing species such as apple, pear, pistachio, and almond, as well as medicinal plants and endemic flowers and species of tulip and crocus. Rare and threatened animals include the snow leopard (Uncia uncia), argali (Ovis ammon), and Himalayan griffon vulture (Gyps himalayensis).

Importance to regional economic growth and integration:
The main economic activity in the ecoregion is agriculture, and mostly in the livestock subsector. More than half of the population lives in poverty, and the situation is worsening due to problems associated with the transition from centrally planned to market economies. During the Soviet era, a highly intensive regional (now international) system of livestock and pasture management was in use, which managed the seasonal movements of millions of sheep and goats between the mountain summer and winter lowland pastures. After independence in 1991, livestock numbers dropped sharply as a result of the suspension of price controls and subsidized feed imports, and the collapse of intra Soviet Union trade arrangements. Despite the decline in livestock numbers, the problem of overgrazing persisted but at a different level. There is overutilization of the more accessible pastures, while those furthest from settlements are undergrazed. A large part of the pasture resource is in poor condition, with low productivity, topsoil erosion, and occasional mudflows in highly degraded areas. The project is now preparing a bioregional plan that takes a holistic approach to economic development and nature conservation.

Importance in promoting a culture of peace and cooperation:
Cooperation among the countries has been historically strong, even before the Soviet period, and the project has helped to strengthen this in approaches to managing the Greater West Tien Shan ecosystem. Nonetheless, the transborder region is characterized by interdigitated national boundaries (a legacy of the Soviet era), with attendant border disputes, and conflicts over managing water flows for agriculture and energy production. The project has been successful in promoting good will among the countries on nature conservation and led to preparation of a bioregional plan for the greater West Tien Shan Ecosystem. This plan, when completed, will be integrated with other high level instruments or regional cooperation.

Main partners:
Support for the project is strong in government agencies, local communities, and NGOs have been closely involved in the process, although the desire for a peace park came first from local communities and there are also a number of indigenous communities in the area. Substantial financial support has come from the Global Environment Facility (GEF) (US$10.15M). Other important international partners have been: (i) EU/Tacis, which has provided technical support in improving legal frameworks (also assisted by the Food and Agriculture Organization of the United Nations) and drafting an interstate agreement, and support to tourism development and other rural livelihoods; (ii) Swiss Agency for Development and Cooperation, which has provided assistance in training on community based tourism development and alternative livelihoods and energy (through Helvetas and the Central Asia Mountain Program; and (iii) the Dutch Government, which assisted with conservation and use of medicinal plants.

Organization:
The four reserves are managed at the national level, but the project has fostered adoption of compatible management standards. The project is being implemented under the guidance of the Transnational Steering Committee.

Main challenge:
The project's main challenge has been in introducing modern methods in conservation biology collaboratively among the three countries.

Lessons learned:
While regional projects are generally more complex to implement than national ones, this project is demonstrating the value of a single regional approach to transborder ecosystem management, in particular building cooperation among the three countries.

This case study was written by Phillip Brylski of the World Bank.