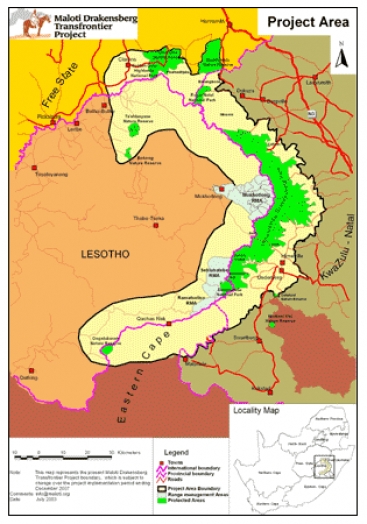 Type of TBPA: A cluster of protected areas and the intervening land.

The project will have two principal products. The first will pull together existing knowledge and fill in the gaps so that at the end of 2007 a clear picture of the most important areas for biodiversity conservation will have emerged. These insights will have led to comprehensive conservation planning both within and outside existing protected areas and limited expansion of the protected area network in the region. The second principal product will be the involvement of local communities in the conservation and development of the region, the establishment of range management areas and grazing associations being but one example of what will be done through community participation. Local livelihoods will have been enhanced through improved resource management and the development of nature-based tourism opportunities.

Importance to biodiversity:
The Maloti-Drakensberg Mountains have globally significant plant and animal biodiversity, with unique habitats and high levels of endemism. However, these special resources are increasingly under threat from commercial uses, timber plantations and cropping. Rangelands in areas of high conservation value have been degraded by a grazing regime based on communal access and decreased regulatory capability, especially in Lesotho. The Maloti-Drakensberg Mountains are also home to the greatest gallery of rock art in the world with hundreds of sites and many thousands of images painted by the San or Bushmen people.

Importance to regional economic growth and integration:
The region is the most important water catchment area for the people of Lesotho and South Africa. Two of the largest civil engineering projects in southern Africa, the Tugela-Vaal Scheme and the Lesotho Highlands Water Project, carry water from the mountains to the economic powerhouse of Africa, the province of Gauteng. On both sides of the international boundary there are local populations who are dependent on the mountains for all or part of their livelihood. The MDTP will make a major impact on the economies of the mountain region and through better range management, the establishment of community conservation areas. Through nature-based tourism and the facilitation of sustainable natural resource based livelihoods a major step forward will have been taken in the protection of the biodiversity and cultural heritage of the Maloti-Drakensberg Mountains.

Importance in promoting a culture of peace and cooperation:
On both sides of the international boundary there are local populations who are dependent on the mountains for all or part of their livelihood. The challenge to conservationists is to conserve this exceptional and unique mountain region while ensuring that the development needs of the local populations are met.

Main partners:
Overall policy and direction for the MDTP is set by a joint Lesotho-South Africa Steering Committee. Under this in each country are Project Coordination Committees and the day to day work is managed by two small teams of full-time staff, one based in Maseru, Lesotho and the other near Pietermaritzburg, KwaZulu-Natal.

Organization:
Starting in late 2002 extending to the end of 2007, approximately US$16 million has been made available to Lesotho and South Africa. The MDTP is funded by the Global Environment Facility (GEF), with the World Bank acting as an implementing agency on behalf of the GEF. Money will be used under eight headings: Project Management, Conservation Planning, Protected Area Planning, Conservation Management in Existing Protected Areas, Conservation Management in Priority Areas outside existing protected areas, Community Involvement, Nature-Based Tourism Planning and Institutional Development.

Main challenges:
For many years, conservationists in South Africa, Lesotho and the wider world have been concerned that the biodiversity, water, wilderness, wildlife and cultural resources of the Maloti-Drakensberg Mountains are not adequately protected. There are extensive areas on the South African side of the international boundary which do not have any formal protection. In Lesotho, there is, for practical purposes, no formal protection of the mountain ecosystems.
The biological and cultural resources of the area are faced with extreme pressure from resource prospectors and vandals. Exacerbating these problems even further is the lack of ownership of the land that restricts investment in conservation of the natural resource base. Due to a communal land tenure system that permits access right to resources, Lesotho has the lowest protected area coverage of any nation in Africa (<0.4%) and as a consequence, biodiversity and natural resources are at risk. Therefore, some sort of intervention is required to stem biodiversity and natural resource losses.

Lessons learned:
Underpinning the two outcomes of this project filling in knowledge gaps and involving local communities in the conservation and development of the region - is an assumption that the MDTP vision will live on long after the GEF funding has dried up. This means that the all major stakeholders (local community structures, municipalities, conservation agencies and government departments environment, agriculture, conservation, tourism) will be actively involved in coordinated efforts to ensure the long term sustainability of conservation, tourism and land use practices in the region.