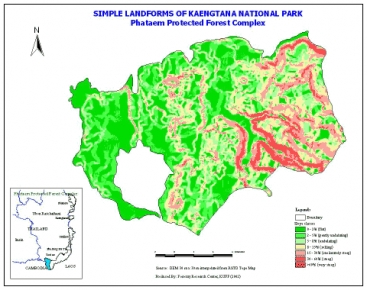 Type of TBPA: A transborder area including existing and proposed protected areas.

The area is low-lying, undulating and forested and is bisected by the River Mekong. The five protected areas are divided into two clusters connected by remnant vegetation in a continuous line and share a border with Laos, including 82 per cent of the shared border between the two countries. Immediately to the northeast and in Laos is the Phouxeingthong National Biodiversity Conservation Area covering 120,000 ha and across the border in Cambodia and stretching further south is the Protected Forest for Conservation of Genetic Resources of Plants and Wildlife in Preah Vihear Province (190,000 ha) which was established recently.
The current project, which is supported by grants provided by the International Tropical Timber Organization (ITTO), aims to develop a bioregional management plan for the Thai protected area complex and to initiate greater transboundary cooperation, particularly with respect to research (biodiversity monitoring, mapping and research into flagship species like the tiger) and steps to reduce poaching and illegal wildlife trade. Ecotourism and trade in locally made products are also being developed.

Importance to biodiversity:
Most current research into biodiversity has been carried out in Thailand. The existing protected area complex contains three main vegetation types: dry evergreen forest, mixed deciduous forest, and dry dipterocarp forest. Over 288 tree species have been identified along with at least 49 mammal species, 145 birds, 30 reptiles and 13 amphibians. However, larger animals such as elephant, banteng, freshwater crocodile and tiger are only found close to the borders with Laos and Cambodia, making the transboundary effort particularly important. There are records of species such as Eld's deer (Cervus eldi) and the kouprey (Bos sauveli) being found across the border in lowland forest in Laos and Cambodia. Some of the forest to the south of the complex is exceptionally intact.

Importance to regional economic growth and integration:
There are 82 villages around the existing protected forest complex and four actually inside the reserves. The area is economically depressed compared with the rest of Thailand and there are issues of poverty in both Laos and Cambodia. Occupations are mainly farming, livestock and fishing.

Importance in promoting a culture of peace and cooperation:
Political relations between the countries have been challenged recently, however, there is a genuine desire to move the political process forward and many regional bodies, such as the Association of Southeast Asian Nations (ASEAN) have offered to work as mediators. In January a temporary break in the initiative occurred but the tension was over in May and the joint Cabinet meeting between Thailand and Cambodia was held in June 2003 to resume the bilateral relationship. One important output of the joint cabinet resolution was the agreement of both countries to strengthen natural resources management and conservation along the border.

Main partners:
The governments of Thailand, Laos and Cambodia, the Faculty of Forestry, Kasetsart University, Bangkok and international partners such as ITTO and IUCN are partners.

Organization:
The Pha Taem Protected Forests Complex is managed by the newly created Department of National Parks, Wildlife and Plant Conservation and is implemented by a project steering committee including a joint task force and a multi-stakeholder committee for round implementation.

Main challenges:
Encroachment continues in the buffer zone areas in Thailand and there are legal logging concessions over reserve forests in Laos and Cambodia, which are adjacent to the Pha Taem Forest Complex; these need to be well-managed to ensure they support conservation measures inside the Complex. There is considerable cross-border trade in poached animals and plants and in cattle illegally moved without proper disease control. There is only one CITES checkpoint in the border area along with 11 other checkpoints, and it remains easy to cross the border illegally. Protected area management still requires development, including developing a legal structure, training, capacity building and resources in Laos and Cambodia. Landmines remain an important problem, particularly in the border triangle, and hamper research and patrols. Overgrazing by domestic livestock and uncontrolled fires add to the challenges. There is also a movement to have Phouxeingthong in Laos to be included in the transboundary project.

Lessons learned:
Making the initiative truly transboundary has proved challenging due to lack of funds and lack of political commitment beyond the control of protected area staff. On the other hand, the cooperation being undertaken at Pha Taem has wide ramifications in terms of developing trust and cooperation between the three countries.

This case study is based on a paper by Dr. Yongyut Trisurat, Faculty of Forestry, Kasetsart University, Bangkok.