A Transboundary Biosphere Reserve in the Carpathians 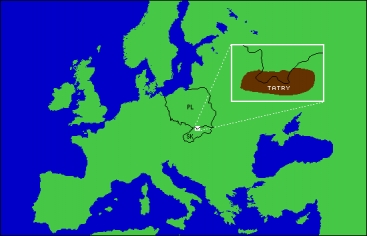 Introduction:
The Tatra Mountains are the highest point in the Carpathian mountain chain, which stretches from Slovakia to Romania, and covers parts of Ukraine, Hungary and Poland. The transboundary protected area, which is also a United Nations Educational, Scientific and Cultural Organization (UNESCO) biosphere reserve, includes two existing national parks on each side of the boundary between Poland and Slovakia; both of these include a variety of strict nature reserves within them and the biosphere reserve also includes buffer zones and transition areas. The area has over 300 named peaks but there are no glaciers or permanent snowfields. There are also over 500 discovered caves, with individual caves up to 20 km in length.

The original protected areas are:

Importance to biodiversity:
The area includes important karst limestone and dolomite scenery, temperate forest, alpine meadows, lakes and rocky peaks. On the Polish side, vegetation changes from mixed beech forest to spruce-fir, a dwarf pine zone and into alpine vegetation; while in Slovakia there are various zones of coniferous forest rising to snow fields. Spruce was planted after the fir and beech were felled, so the vegetation of the area has undergone a number of changes in parts of the area. There are many endemic or relict species including a Tatra subspecies of the chamois deer (Rupicapra rupicapra tatrica) and the marmot (Marmota marmota) and important populations of the bear (Ursus arctos) and lynx (Lynx lynx). The area is noted as an important refuge for high concentrations of rare relict fauna and flora from the Tertiary or Quaternary glacial period and several unique species of glacial relict fish live in mountain lakes. There are similarities between the fauna and flora of Tatra and Scandinavia. The Tatras Chamois Rescue Project aims to stabilise the population of the endangered chamois population.

Importance to regional economic growth and integration:
Tourism is the most important economic activity for the area, although forest management is also important in the buffer zones. In Poland there are over 3 million visitors a year, each paying an entrance fee, and roughly 5 million people a year visit the larger Slovak part of the biosphere reserve. Walking and in winter skiing are important activities and there are a cluster of tourist resorts and hotels in the lower areas on both sides of the border. There are for example over 600 km of hiking trails in the Slovak side of the protected area.

Importance in promoting a culture of peace and cooperation:
Relations between the two countries are good.

Main partners:
Governments of the two countries worked with UNESCO to set up the transboundary protected area. There are important research stations that carry out long term monitoring and research in the area, including a research station in Slovakia. Many tourist companies are operating in the area and there are also private land-owners and people carrying out forest management and farming.

Organization:
In Poland management is undertaken by the Tatra National Park, Ministry of Nature Protection, Natural Resources and Forestry, and in Slovakia the area is managed by the Tatry National Park Administration, which reports to Ministry of the Environment through the Headquarters of the State Nature Conservancy.

Main challenges:
The area has been extensively altered through centuries of management and in some areas management pressures continue today. High mountain forests have been cleared to make way for pastures, timber and charcoal burning. There are heavy tourism pressures, particularly in Poland but impacting on Slovakia as well, and in the past these have been largely uncontrolled leading to development, trampling and erosion. The area suffers from high levels of air pollution and acid rain, although some of the impacts are buffered by the high limestone content of soils and water. A key challenge for the future is how to balance the needs of local inhabitants, tourism and nature conservation in one of the most heavily visited places in central Europe.

Lessons learned:
The concept of transboundary protection has helped to build good working relations between countries in the transition from state communism to a different economy and, in the case of Slovakia, new independence.

This case study was prepared by Nigel Dudley for IUCN.