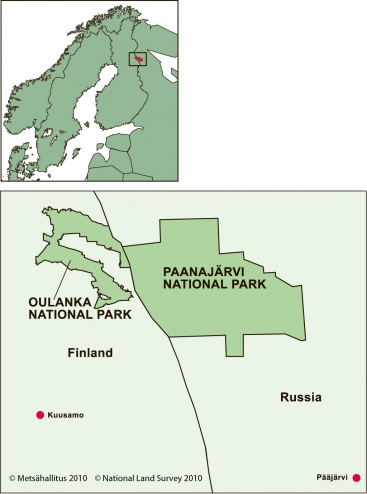 Type of TBPA: Two national parks interlocking at the border between Finland (EU) and Russia

Introduction
In Finland, Oulanka national park was established in 1956 and extended in 1982 and 1989. On the other side of border, Paanajärvi national park was born in 1992, and from the beginning, these two parks have been in close co-operation. The basic structures and services in Paanajärvi were in the early years developed  with the help from the staff of Oulanka, and larger steps were taken during joint development projects in the 90’s and 00’s. Oulanka, being a middle-sized (290 km2) national park in Finnish scale, benefits from the twinning with much larger Paanajärvi (1044 km2). Besides the pristine river Oulanka, which flows through both parks, Oulanka and Paanajärvi share the same habitat types, although with different distributions. The parks share also a common cultural history with Finnish and Karelian influencing each other. Both national parks are classified under the IUCN category II.

Importance to biodiversity
Oulanka and Paanajärvi parks harbor a significantly higher level of biodiversity compared to surroundings. This is due to microclimatic and geological factors. The outstanding diversity is manifested both on species and habitat levels. About 600 species of vascular plants have been observed, and also mosses and fungi are well represented.

Importance to regional economic growth and integration
Oulanka national park with its 160 000 annual visitors is a significant source of tourism income. In summer time tourism, it is the most important attraction in the region. It has been estimated that the visitors of Oulanka make about 15 % (15 m€) of the annual tourism income in Kuusamo municipality. Although the visitor numbers of Paanajärvi are clearly lower (6 000/year), the awareness of Paanajärvi brings more added value to the tourism destination of Kuusamo region.

Importance in promoting culture of peace and co-operation
The western part of Paanajärvi belonged to Finland before the war. The attitudes of Finnish people towards their eastern neighbour have been skeptical or negative. Therefore, there is a need for the parks to act as a model of peaceful coexistence. The status of Paanajärvi as a national park has also allowed former residents and their descendants to visit their old homeland. During the last two decades, co-operation across the border has taken also other forms and involved other actors.

Main partners
Both parks have they own local stakeholders. The main stakeholder groups are presented in the co-operation groups of both parks and they involve local inhabitants, tourism business, local administration and environmental NGO’s. Tourism companies operate in the parks upon a contract.

Organisation
Oulanka NP is managed by the Natural Heritage Services of Metsähallitus, a state enterprise with public service tasks. NHS provides tha management services mainly with the state budget from the Ministry of Environment. The administration of Paanajärvi NP is under the federal authority of Russia.

Main challenges
The joint management plan for the transboundary park complex identifies several threats. Among the most challenging ones are climate change, affecting especially fell vegetation in the highest summits in Paanajärvi, management of migrating brown trout population, and in Oulanka, the grazing pressure on lichen biomass by the semi-domesticated reindeer. A challenge for the near future is also to make it easier to cross the order directly from park to park, which is presently almost impossible and requires a 250-kilometer drive via the official crossing point.

Lessons learned
A durable relationship has to be built on relations between individuals willing and committed to co-operation. Much can be done as annual routines, but bigger steps in development has to be financed with project funding.