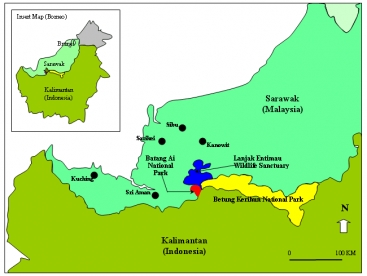 Introduction:
A transboundary conservation area of almost a million hectares was established on the island of Borneo in 1994. It covers some critically important habitat, remaining as natural forest in an area otherwise almost wholly transformed into timber concessions and oil palm plantations. Its future is vital to the wildlife of the island. Joint management of the watershed and surrounding catchments creates a major conservation opportunity. The protected areas are:

The International Tropical Timber Organization (ITTO) has supported the project from its inception, providing funds for baseline data collection (including the ITTO Borneo Biodiversity Expedition in 1997), socio-economic studies, community-related activities and the development and implementation of protected area management plans.

Importance to regional economic growth and integration:
Borneo is less developed than other parts of both the countries. The protected areas complex is exploring options for shared benefits across the border, including joint ecotourism activities and community-related projects in buffer zones (for example, in Sarawak indigenous fruit crops and ponds for high-value fish have been developed). Some members of surrounding communities have requested that forests under their customary rights be included in future extensions of the protected areas and those involved in ecotourism understand better the issues relating to orang utan conservation.

Importance in promoting a culture of peace and cooperation:
Although there have been economic and political tensions at the borders between the two countries, the protected area complex is not a peace park and relations between the governments remain good. The fact that some of the indigenous groups are related across the national border means that the protected areas help them to cooperate more fully than might have been the case otherwise.

Main partners:
Both countries' governments are actively involved in the initiative and have indicated continued support. ITTO has been a major donor and has helped to build cooperation. Local people are the direct users of the protected areas and rely on them for most of their protein. In Kalimantan, forest areas traditionally belonging to indigenous peoples are included in the park under a co-management system. In Sarawak, special privileges are granted to the traditional users to hunt and collect forest produce from the protected areas for domestic consumption. Representatives of local communities are appointed Honorary Wildlife Rangers and members of Special Wildlife Committee in Lanjak Entimau Wildlife Sanctuary and the Special Parks Committee in Batang Ai National Park.

Organization:
The mechanisms to promote common values will involve stakeholders from all levels: governments (national, regional and district), private sector and local communities. To promote a common vision and understanding, a shared logo is being adopted using the orang utan as the symbol.. In February 2004, Indonesia and Malaysia formally submitted a proposal to UNESCO to designate the 3 conservation areas as the first ever transboundary World Heritage Site. One aspect of the collaboration is an approach to the United Nations Educational, Scientific and Cultural Organization (UNESCO) to have the sites nominated as a trans-border World Heritage Site in Borneo. The ITTO expedition marked the first concrete outcome of collaboration and following this a Task Force was established in 2001 to plan joint goals and exchanges of information and staff. A more formal coordinating committee is also planned.
As the project matures, on-the-ground cooperation is growing, including joint research, increasingly frequent contact and dialogue between staff in the two countries, staff exchanges and cooperation with patrols, inventories and community activities.

Main challenges:
While communities immediately around the protected areas are cooperating well, those further away are not necessarily doing the same and as the parks are now richer than surrounding areas in game and plants, poaching is a problem. The whole of Borneo is changing fast and protected areas remain under pressure and rather isolated. There is also a lack of trained conservation staff in both countries. Different laws and socio-economic conditions in the two countries can create a range of difficulties in practical cooperation.
There is a continued need for coordinated and effective operational plans at an implementation level and for more formal cooperative agreements between the various institutions and communities involved. Funding remains a challenge although the programme is currently supported both by the two governments and also the local and international private sector.

This case study is based on a paper by Dr. Paul Chai, Project Leader and Forest Ecologist, Lanjak Entimau Project, Sarawak and updated by Tanya Rosen, WCS.