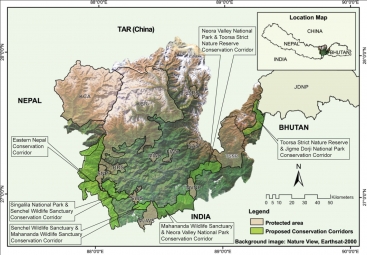 Type of TBPA: A cluster of isolated and transboundary protected areas.

The proposed Kangchenjunga Landscape (KL hereafter), a transboundary mountainous area with highly diverse topography and rugged terrain is one of the most important transboundary landscapes in the eastern Himalayas. It spreads over diverse ecological zones in eastern Nepal, Sikkim and Darjeeling Himalayas of India, and western Bhutan to encompass the southern stretch of Mount Kangchenjunga region. On the northern side, a small part of the northern slope extends into the Tibetan Autonomous Region of People’s Republic of China. At the heart of this landscape, lies the Mount Kangchenjunga (8,586m), the world’s third highest mountain peak that sustains many of the vital Himalayan rivers and crucial watersheds.

The International Centre for Integrated Mountain Development (ICIMOD), a regional knowledge and enabling centre based in Kathmandu, Nepal has been promoting regional cooperation for effective conservation and development of critical transboundary landscapes in the Hindu Kush Himalayas since last 29 years. ICIMOD has identified seven such transboundary landscapes across the region, one among which is KL.  ICIMOD with support from the MacArthur Foundation and GIZ and in collaboration with partner institutions in Nepal, India and Bhutan, has been working proactively over a decade (since 2002) to promote and sustain participatory transboundary biodiversity conservation and development initiative in this globally significant landscape. The initiative aims to promote transboundary biodiversity and cultural conservation, ecosystem management, climate change adaptation and sustainable development within KL thereby using landscape approach as a conservation measure. Moreover, the conservation efforts are focussed on developing habitat contiguity by connecting isolated PAs with environmentally managed corridors so as to reduce habitat shrinkage and isolation of already small population thereby making them less vulnerable to extinction.

The KL is one of the richest landscapes in the Hindu Kush Himalayan region that forms a part of the ‘Himalaya Hotspot’, one of the world’s critical centres of biodiversity. The diversity of habitat types found in the landscape ranges from Himalayan Alpine Meadows to the Eastern Himalayan Broadleaf and Conifer Forests, to the Terai-Duar Savannas and Grasslands, which are among WWF’s Global 200 Ecoregions. The KL is also exceptionally rich in faunal and floral diversity. It provides habitat to many umbrella and charismatic species including snow leopard (Uncia uncia), tiger (Panthera tigris), elephant (Elephus maximus), red panda (Ailurus fulgen), takin (Budorcas taxicolor), musk deer (Moschus chrysogaster) as well as to many threatened and endangered plant species including Himalayan Yew (Taxus wallichiana), Kutki (Neopicrorhiza scrophulariflora), Panch aule (Dactylorhiza hatagirea), etc. Out of recorded 125 mammalian species, 4 are endemic to this ecoregion. In addition, almost 500 bird species are found across the ecoregions of which eleven species are near-endemic, and one, the rufous-throated wren babbler, is strictly endemic, that is restricted to the eastern Himalayan broad-leaved forests. Furthermore, the region is breeding ground for number of magnificent birds and important flyway for migratory wild fowls.

As one of the specific objectives of KL initiative is to strengthen the landscape as an integrated conservation linked development model, it aims to carry out programmes that would enable participatory conservation at the landscape level together with integrated regional economic and social development. It focuses on building capacity among local communities so as to provide better livelihood opportunities and to sustainably manage and conserve natural resources as well as cultural values of the landscape. For instance, biodiversity based micro- enterprises such as ecotourism, apiary, medicinal and non timber forest products (NTFPs), are being promoted in the region by providing trainings to the local people residing within the landscape. Moreover, this initiative is also working to bring in light the importance of economic benefits derived from the ecosystem services of the landscape in order to stimulate support at the national and international level for appropriate conservation measures. This would help in advocating for incentive mechanisms for local communities to maintain the ecosystem and meet their livelihood needs by sustaining the flow of services.

Although, the cooperation among the countries has been historically strong, this transboundary conservation initiative has helped to further strengthen this relationship. National and regional collaboration is taking place to establish effective and ecologically managed biodiversity conservation corridors. Comprehensive participation of a wide range of stakeholders from all partner countries is solicited to manage them. Furthermore, the transboundary initiative has also ameliorated the co-operation among the countries for increasing economic and environmental interdependence through policy dialogue, cross learning and information sharing among the countries.

ICIMOD, together with the governments of Nepal, India and Bhutan have been closely involved in the process of creating a Kangchenjunga Transboundary Landscape Conservation and Development Initiative. Particularly, the Ministry of Agriculture and Forests from Bhutan, G.B. Pant Institute of Himalayan Environment and Development, Almora (which has Sikkim Unit at Gangtok, Sikkim) and Department of Forest from West Bengal and Sikkim of India and Ministry of Forests and Soil Conservation from Nepal are the main partners of ICIMOD in developing this landscape initiative so as to conserve biodiversity through the development of conservation corridors among protected areas.

ICIMOD in collaboration with several associate organizations from partner countries is engaged in implementing the landscape initiative. The associate partner organizations are:

The protected areas in KL have faced various environmental and anthropogenic stresses. Habitat encroachment, poaching of wildlife and illegal trade, increasing demand of fuelwood and timber, overgrazing by livestock, extensive collection of NTFPs, and often, unregulated tourism have led to habitat degradation and fragmentation, biodiversity loss, and decreased agricultural productivity of the landscape. Promoting sustainable biodiversity conservation through the regional cooperation on development of networks of corridors linking PAs has been an important strategy for conservation in the landscape. However, the conservation and management practices employed by the 15 PAs in the landscape differ, as do the policies of the countries involved; this creates a challenge in making landscape-level management compatible with existing practices and policies. Furthermore, wildlife poaching and its illegal trade, illegal extraction of natural resources from protected areas, transboundary grazing and human-wildlife conflict are some of the transboundary challenges that still exist.

The KL is under immense pressure from human activities. Conservation together with the sustainable development of the landscape area is possible through various options like providing alternative and sustainable means of livelihood for local communities. There is a great potential for strengthening community-linked conservation activities based on the available biodiversity by enhancing agro-forestry, organic farming, beekeeping, and medicinal and aromatic plant cultivation which would on one hand minimise pressure on forest resources and on the other hand provide opportunities for economic development. However, such potentials need further exploration, especially on technologies and market support with, of course, policy backing. The facilitating role played by ICIMOD for a collaborative effort for conservation and development has been recognised and progressing.