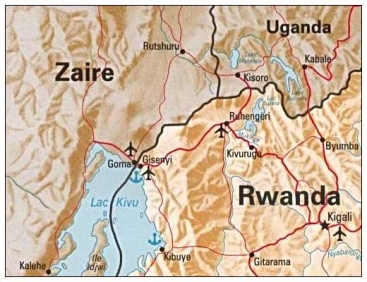 Type of TBPA: A cluster of separated protected areas without intervening land.

Introduction:
The Great Lakes region of Central Africa has some of the richest biodiversity on earth but also experiences political instability. Managers of three protected areas, separated geographically but linked by their ecology and problems, are working together to develop a transboundary initiative in the framework of the IUCN Peace Parks Initiative in the Great Lakes region. The protected areas are:

Over the past few years, managers and their staff have been working during a time of great difficulty, with influxes of refugees from civil wars and clashes between various groups taking place in the protected areas. Problems of poor infrastructure also affect protected areas in the region. Conservation laws are old and no longer suitable for the current situation: for instance they are rooted in top-down approaches to conservation that give little scope for community participation.
Cooperation makes sense. The area has a common history, common flagship species (with the mountain gorilla being found in both Virunga and Volcanoes) and protected areas help to regulate watersheds between the Nile and Congo rivers. Animals move between the protected areas and there has long been exchange of expertise and information.
Initial aims are to harmonise policies and laws; increase cooperation on monitoring and surveillance, including development of a warning system of problems relating to conflict in Kibira and Virunga; implementation of the IUCN code of conduct for protected areas in time of conflict; and coordination on conservation and refugee issues. One problem is a lack of a respected international framework for management and it is hoped that the Conference on Central African Moist Forest Ecosystems (CEFDHAC) might fulfill that role, although the Great Lakes Countries Economic Community and United Nations Educational, Scientific and Cultural Organization (UNESCO) initiatives also offer other options for dialogue.

Importance to biodiversity:
Central Africa contains more than 60 per cent of Africa's biodiversity and over 80 per cent of its tropical moist forests. Although the area is probably most famous for its mountain gorilla population and chimpanzees, it is abundant in other plant and animal species, many of which remain largely unknown.

Importance to regional economic growth and integration:
Currently the region is trying to rebuild its economy after wars in Burundi and the eastern part of the Democratic Republic of Congo (DRC). Encouraging tourism remains difficult but is important both economically and for the international status of the countries.

Importance in promoting a culture of peace and cooperation:
The Peace Parks concept is being promoted as one way of building trust and cooperation; communities recognise this as a long term goal.

Main partners:
There are currently many actors involved in conservation in the region, although more coordination is needed. The International Gorilla Programme is running surveillance and monitoring and supporting ecotourism; the Dian Fossey Gorilla Fund is undertaking surveillance and forest rehabilitation; the UN Food and Agriculture Organisation is promoting food self sufficiency for displaced people; IUCN with the MacArthur Foundation is providing support and CEFDHAC is helping with capacity building and domestication of wild species in Kibira to reduce bushmeat hunting. A Memorandum of Understanding has been signed between the IUCN Regional Office for Central Africa and the protected areas to work on rehabilitation of damaged forests and to develop rapid responses to crisis situations in the region.
Many other stakeholders are involved: armed groups, mining and logging companies, researchers, religious communities, indigenous and traditional communities, local NGOs, fishing communities, local administrations and displaced people; but again more coordination is needed.

Organization:
Parks are currently managed by state-controlled institutions: the National Institute for Nature Conservation in Burundi; the Congolese National Institute for Nature Conservation in DRC; and the Rwandan Tourism and National Parks Administration. However, more capacity and skilled management is needed. None of the protected areas have comprehensive management plans at the current time.

Main challenges:
Socio-political crises and wars since 1993 have led to enforced migration, a refugee crisis, insecurity and deforestation, with negative impacts on biodiversity. Over 3 million refugees lived temporarily in or around Virunga between 1994 and 2002, leading to high biodiversity loss these problems remain today. More than 4.4 per cent of the protected area has been transformed into farmland. There has been little staff training, no replacement (despite high losses of personnel) and much donor aid has been withdrawn.

Lessons learned:
Armed conflicts create particular and acute threats to protected areas, but experience shows that continued management activities during these periods is both possible and essential. Lack of a common vision between the various partners has hampered some of these efforts and such a vision is now urgently required. New tools, such as the draft code for transboundary protected areas in times of peace and armed conflict, can help but need to be finalised and implemented. International partners and donors need greater awareness of conservation during conflict and there has been a mismatch between rhetoric and reality, with funds being withdrawn from the region at the very time when they were perhaps most essential. Sustainable funding mechanisms are crucial for the region if conservation objectives are to be maintained during this particularly difficult political period.

This case study is based on a paper by Cléto Ndikumagenge of IUCN.