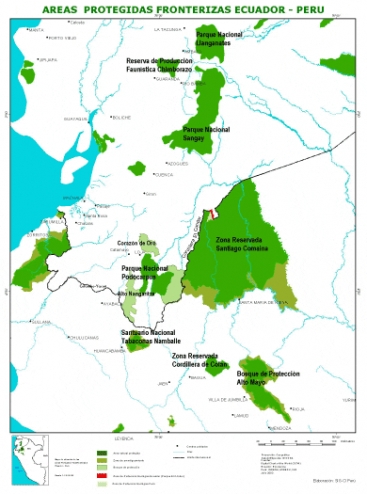 Introduction:
The initiative currently includes two small protected areas on each side of the border, linked to a much larger “reserved zone” in Peru. The areas include:

Importance to biodiversity:
The area contains dense cloud forests, with an exceptionally rich biodiversity including several endemic species. The remoteness and, particularly from the Peruvian side, inaccessibility means that species under threat in other areas of the Amazon are still plentiful here. Endangered species found in the region include a local subspecies of the long-haired spider monkey (Ateles belzebuth belzebuth) the spot-winged parrotlet (Touit stictoptera), white-chested swift (Cypseloides lemosi) and the golden-plumed conure (Leptosittaca branickii). Bird species such as the Traylor's forest falcon (Micrastur buckleyi) are not only endangered but also endemic.

Importance to regional economic growth and integration:
The region currently suffers from poor infrastructure and poverty. The transboundary conservation initiative is built around a ten year Bi-National Development Plan, aiming to carry out activities and projects that will allow greater regional economic integration, thus speeding up its productive and social development and addressing poverty alleviation. The Bi-National Development Plan provides a political umbrella for the design and implementation of basic infrastructure and social development projects, along with protection and sustainable use of natural resources. The plan is estimated to cost $3 billion, to be met by the two governments, the international donor community and private enterprise. In addition, the environmental benefits of the region are recognised. Cloud forests are particularly important in maintaining hydrological cycles and this role was highlighted in research that helped develop conservation plans for the region.

Importance in promoting a culture of peace and cooperation:
The mountainous Cordillera del Condor region between Peru and Ecuador has been an area in dispute for decades. The concept of using a peace park to help reduce conflict and build cooperation has been discussed since the 1980s and was the first driver for the initiative. Interest in conservation and a strong desire for peace amongst local inhabitants led to the signing of a Presidential Act in October of 1998, where both countries reached an agreement that ended hostilities and opened new avenues for bilateral cooperation on conservation issues. The consolidation of the peace process has been cemented by both the establishment and management of protected areas and the promotion of sustainable development projects for local communities.

Main partners:
The governments of Ecuador and Peru have been closely involved in the process of creating a transboundary protected area, although the desire for a peace park came first from local communities. There are also a number of indigenous communities in the area. The International Tropical Timber Organization provided technical and financial support for a scoping study to assess the feasibility of different conservation strategies and to consolidate the network of transboundary protected areas present in the region. It then funded twin projects, one on each side of the border, worth a total of US$1.4 million to identify potential land-use zones for the TBPA area of influence (including the Santiago-Comaina Reserved Zone) through the use of land-use maps, biological inventories, participatory rapid assessments, and monitoring and evaluation programs, to consolidate land tenure, and to create a local protected area co-management framework and management plans for the operation of the protected areas. These two projects are now under way. Further support for the initiative has come from the UN Foundation and The John D. and Catherine T. MacArthur Foundation.

Organization:
The individual reserves are run by national protected area agencies but there is a bi-national steering committee to oversee the initiative and those parts of the Bi-National Development Plan (around half the total in terms of value) that are joint between the two countries. The individual countries have committed to certain time-limited actions, including: for Ecuador agreeing on a Model of Regional Environmental Management, strengthening participatory mechanisms and fostering sustainable economic alternatives; and for Peru agreeing on a sub-system of protected areas through a rapid participatory assessment programme and working on sustainable development projects with local indigenous communities.

Main challenges:
The area still remains tense and much work will be needed to build a lasting peace. There are also many pressures, both on the environment and on local communities, and an inevitable tension between the needs of development and poverty alleviation on the one hand and the needs of conservation on the other.

Lessons learned:
Although local communities were lobbying for a peace park for some years, momentum increased once funding was available to carry out research and to draw up comprehensive proposals. The fact that the area contains important biodiversity was a key factor which has helped lever additional support for impoverished human communities living in the same area.
This case study is based on a paper by Carlos Ponce of Conservation International.